From the desk of Missouri State Auditor Nicole Galloway 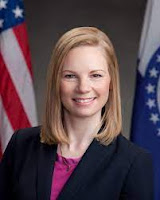 Missouri State Auditor Nicole Galloway released findings this week of an audit of a special road district in Bates County.

Taxpayers in Bates County had petitioned Galloway's office for an audit of the Cornland Special Road District that oversees twelve miles of gravel road in rural Bates County outside of Butler. Auditor Galloway found conflicts of interest and lack of transparency in the audit. The audit resulted in a rating of "fair".

Auditors found that two township board members were paid for performing road repair and maintenance work in 2021. The board members receiving payments for road work services while also serving on the board creates an apparent conflict of interest.
Missouri law prohibits elected officials from performing any service for compensation, other than compensation for the performance of their duties. Additionally, the board did not prepare and file IRS 1099 forms to report the payments made to these board members.

Additionally, auditors found that the board only held one public meeting in 2021, but did not keep an agenda or meeting minutes in compliance with the Sunshine Law.  indicated to auditors that the board met informally on other occasions throughout the year. In one of those informal meetings a vote was taken that awarded road work business to a vendor owned by a family member of a township commissioner.

The audit found that the district also does not have a formal bidding policy and bids or proposals were not solicited for gravel and rock hauling. After flooding damaged district roads in 2019, the district applied for and was awarded up to approximately $130,000 in federal and state disaster assistance grants to reimburse repairs to roadways.
The grant requires the district to have a documented procurement policy that complies with applicable federal, state, and local regulations, and publicly solicit competitive bids. At the time of the audit, federal and state disaster assistance reimbursements actually received by the district were below the total amount approved and much of the repair work remained unfinished.
Published by Bates County News Wire on September 16, 2022