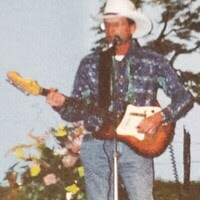 Walter William “Junior” Kroos, age 79, of Warsaw, Missouri passed away Tuesday, September 27, 2022 at his home. He was born on November 5, 1942 in Ionia, Missouri the son of Walter J.H. Kroos, Sr. and Ada (Brown) Kroos. He grew up and attended school in Lincoln and later graduated from Lincoln High School in 1961. Junior was united in marriage to Norma Kearns in Windsor, Missouri on December 31, 1966.
They made their home on a farm in Benton County. Junior raised cattle, grew crops and diary farmed all his life. He enjoyed music and started playing guitar at the age of ten. Junior played in a band, as lead guitar, most every weekend for the past sixty years. He also enjoyed to hunt and fish.

Junior is survived by his wife Norma Kroos, of the home, a daughter Shelbi Force, and husband Steve, of Savannah, Missouri, three grandchildren; Shaya Force, of Colorado, Matthew Force, of Savannah and Michaela Force, of Illinois, a sister, Jessie Hagen, of Cole Camp, Missouri, numerous other relatives and many friends.

Funeral Services for Walter “Junior” Kroos will be held at 2:00 P.M. Monday, October 3, 2022 at the Davis-Miller Funeral Home in Lincoln, Missouri. Visitation will be held one hour prior to the funeral from 1:00 until 2:00 P.M. Interment will follow the funeral at the Lincoln Cemetery.