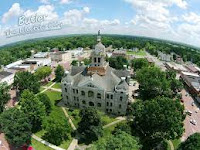 The 20th day of July Term

The previously discussed road in Rich Hill #2007 (August 15th) has been repaired. This road has a fiber Optic cable that runs underneath. This cable runs data from Kansas City to Joplin. Road has been raised and culvert installed. Payment for this repair is coming out of CART funds.

The Magnesium Chloride flakes have come in and payment is being made from CART funds. Road and Bridge Supervisor, Bill Stephan, will be purchasing the spreader to get this on the roads needed for dust control. Work will have to be coordinated with the townships involved.

1:30 Fiona Bagwell with NextERA energy, John Felitto and Allen Anderson. Updates on Court ruling that tax exemption of solar energy projects is unconstitutional. This ruling negates the need for a PILOT (payment in lieu of taxes). There was a discussion, but no decision given on how to go forward with these agreements. At this point the project goes onto the tax rolls once constructed. Allen mentioned 2 arrangements one most used is an old one, Chapter 100. Chapter 100 locks the tax into the county. The other is Enhanced Enterprise Zones. Responsibility for the tax is the project owner not the landowner. If sold to utilities, then the utility tax goes to the state level then distributed throughout the state.

Other items discussed were the landowner can request the fence to be left after the decommissioning phase. If the land is sold by original landowner during life of lease the lease goes with the land.

This current project is to have a 30-year lease with two 10-year extensions if possible.

What we can expect to happen. An inventory for best routes and roads to use and adjustments and repairs needed to those roads. Once all information is together and design finished, local meetings will happen on the project and update meetings. All local emergency and first responder entities will be notified. Media will be notified and updated as well. Projected construction to start in 2026.

3:00 Charles Rush with Cook Insurance came in to present the upcoming health insurance contract renewal. Charles presented several options. Keeping with our Aetna, our current insurance, monthly premium would be $778.55 and projected to go up again next year. Monthly premiums with Blue Cross Blue Shield would be $643.55, next year an unknown. Copay and out of pocket cost to employees goes down with Blue Cross Blue Shield. He did have quotes from other companies, yet they were much more with higher cost. Southern Commissioner Trent Nelson made the motion to go with Blue Cross Blue Shield with the county still paying full premium for employees. Northern Commissioner Kenny Mooney seconded the motion. All voted yes. Motion passed with no opposition.

The 21st day of July Term

Road and Bridge Supervisor Bill Stephan came in to discuss a few needs. He is looking in to seeing what pre-made box culverts cost. He is also needing a new tractor and mower or other type of mower. They are holding off replacing employees that left for now till next spring.

The 22nd day of July Term

Ray Shaffer and Nina Carlton came in to talk over the Courthouse painting open bids. All bids are in. One could only do the painting and not the repairs needed in some areas. Bid came down to Nick Alkire at $15,700.00 and Brent Kelso at $13,400.00. Both are local people, and both quoted with paint and materials with repairs. Northern Commission Kenny Mooney made the motion to accept and move forward with the quote from Brent Kelso. Southern Commissioner Trent Nelson seconded the motion.

All voted yes with no opposition.

Ray is working on the Security entrance for the Courthouse. Plans have been looked over by the Sheriff Office. The Projected date of completion is October first. This area will have to be added to the cleaning duties on a regular basis.

The 23rd day of July Term

1:30 Charles Rush with Cook Insurance on the quote for Property and Casualty Insurance. Current insurance has declined continuing coverage. Several companies declined to quote coverage on smaller municipalities as claims and cost have been high over the last years either with natural disasters or law enforcement coverages. Missouri Rural Services did locate one company that is willing to work with smaller municipalities. Tokio Marine HCC. Charles did get them to meet the current coverage and cost. Presiding Commissioner Jim Wheatley has asked Charles to go back and ask Tokio Marine to quote this with higher replacement coverage to the Courthouse. Charles will bring back an updated quote on Wednesday the 21st.

The 24th day of July Term

9:30 Jim Patterson with American Broadband in to ask for a letter of recommendation. He is seeking a state grant to build a fiber broadband network in Rich Hill. The letter helps in the states scoring of the award process. They specialize in building broadband in rural and isolated areas. They currently have builds in five states including Missouri. Currently working from Warrensburg area to Sedilia. Also, in Nevada. Options include co-axle connect in home to fiber on pole or underground, or streaming directly through Apple, Roku and Fire products. They also have phone services.

The Presiding Commissioner elect for Vernon County, Joe Wilson, stopped in to introduce himself and visit. See our process in motion and ask a few questions.

Andy Dudley with Homer Township came in seeking advice on recent issues with being on the township board and doing hired work for the township. He had decided to resign so he will be able to work on the roads. He will be submitting a formal letter to the commission.

1:30 Ryan Wescoat, the City of Adrian Administrator, came in to drop off the ARPA Application to repair the water pump failure they have experienced.

2:30 Charles Rush brought back the answer to increase coverage in the Property and Casualty Insurance for the Courthouse to 10 million and 12 million. The company, Tokio Marine will only increase the coverage to 10 million. The increase in premium is 67,000.00. Total Premium for the year would be $218,940.00 annually. Northern Commissioner Kenny Mooney made the motion to accept the Tokio Marine quote on Property and Casualty for $218,940.00 annually with the increased coverage for the Courthouse. Southern Commissioner Trent Nelson seconded the motion. All voted yes. No opposition. Motion carried.

The 25th day of July Term

Cornland Special Board Members Gary Anderson and Don Hill came in to discuss the findings of the State Auditor's Report, (see scanned documents at end of the monthly minutes in official book), in answer to the Audit requested by the citizens. There was some miscommunication in who was being audited due to be verbiage of the report. The Cornland Special Board members are referred in the document as commissioners. The County Commissioners are not involved in this audit. The district was found to have deficiencies in internal controls, noncompliance with legal provisions, and needing improvement in management practices and procedures. The board is taking steps to improve these areas. Southern Commissioner Trent Nelson added Osage Township would be willing to talk to them about maintenance of the roads and possible hire of their equipment and person.

The 26th day of July Term

9:45 am Julie Siebert with Great River about an invoice the County paid for electrical repair done by Osage Valley during BRO -21. The invoice was never submitted for reimbursement from Mo-DOT. They have sent the submittal letter, and need it signed and sent back. The Commissioners signed the letter, and it was returned.

Ray Shaffer, courthouse maintenance and Nina Carlton, courthouse housekeeping brought over the remaining quote from Johnson Controls for the fire alarm system update. They submitted 2 quotes one for code compliance update, and one for full new install. There wasn’t any information about monthly maintenance fees, or inspection fees. The previous quote from Brian Goings with Atronic was for a completely new code compliant system with a monthly maintenance fee and yearly inspection fee. ($49.00 monthly then $2,100.00 yearly inspection fee totaling $2,688.00 yearly cost) Any alerts are reported immediately to the fire department. Jim asked if they had a leasing option that would cover repairs and updates. Brad said he had not heard of them but could ask about it. He did mention there was a maintenance and repair option. Most detectors last 10 years. The system will let them know when the detectors need replaced. He will email Ray the quotes of this service plan.

Other updates from Ray and Nina are interior painting begins October 17th. He is still working on the floor for the security entrance and the push button to open the door has come in.

Road and Bridge Supervisor Bill Stephens in for updates.