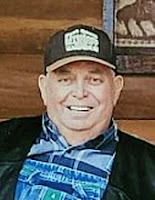 Russell Charles Snyder, 87, of Fort Scott, left this earthly home to join his loved ones in Heaven on Saturday evening, October 1, 2022 at Medicalodges Fort Scott. He was born March 10, 1935 to Lawrence and Dora (Russell) Snyder at rural Redfield, KS.

Russell had many adventures as a young teenager, traveling the country by foot and train, working for various farmers. He married Clara Fern Wise on September 1, 1955.
To this union they lovingly added two children, Shelly and Charles. Through the years, Clara and Russell had many fur babies with which they shared their lives. They always doted on their fur children and were very saddened when any of them were lost. Russell cherished their memory and loved to talk about them. Clara preceded him in death on February 25, 2011 and was always fondly spoke of and remembered by Russell. He served in the Korean War with the United States Army from January 1958 to December 1959 gaining numerous memories from his time stationed there.
He drove an over the road truck most of his adult life, hauling various products and obtaining many stories along the way. Later he worked for Peerless Products of Fort Scott until his retirement at age 62; he then hauled cattle and worked at Fort Scott Livestock Company until his full retirement at age 75.
He very much enjoyed sharing anecdotes of his life and journeys around the country. There was never a time when visiting with Russell that you didn’t leave without hearing, very colorfully, quite a few of his life reminiscences. He has left his family with a multitude of stories to continue sharing and remembering with joy and laughter, as they hear his voice retelling them repeatedly.

Those Russell joins in God’s loving arms include his wife, Clara; his father and mother; a brother, Lloyd Snyder and his wife Treva; a sister, Marybelle Hall and her husband Joe; two nephews and a great-nephew.

Funeral services will be held at 10:30 A.M. Thursday, October 6, 2022 at the Cheney Witt Chapel. Burial will follow at the Memory Gardens Cemetery. The family will receive friends from 5:00 – 7:00 P.M. Wednesday at the funeral home. Memorials are suggested to Paws & Claws and may be left in care of the Cheney Witt Chapel, 201 S. Main St. Fort Scott, KS. 66701. Words of remembrance may be submitted to the online guestbook at cheneywitt.com.