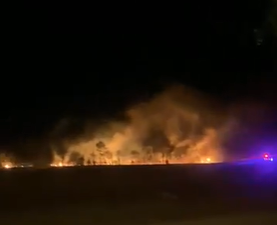 On the evening of 10/23/22 the Rich Hill Fire Department was toned out around 2045 hrs for a possible structure fire south of city limits.
Upon arrival it was found to be an extremely large brush fire along the railroad tracks which extended north from county road 10008.
Due to extremely thick vegetation, dry conditions, and high winds the fire was quickly extended north along the railroad tracks towards city limits. This was of concern due to residential neighborhoods. Mutual aid was requested from the following departments. Adrian Fire, Butler Fire, Compton Junction Fire, Hume Fire, Bates County Sheriffs Department, and Bates County EMS.
With great efforts the fire was brought under control before any residential homes were lost or damaged. This was of concern and an evacuation plan for several residents was in place. But fortunately did not need to be activated.
Several units were placed at the incident site and several units were placed in areas of concern on the north end in neighborhoods for protection where several spot fires where extinguished due to flying embers which were being carried nearly a quarter mile due to high winds.

The Rich Hill Fire Department would like to extend a huge thank you for the speedy response and manpower by all mutual aid departments.
Total on scene we had 15 fire apparatus, 32 firefighters, an EMS crew, and an unknown amount of Bates County Sheriff Deputies ready to assist if an evacuation was to be needed.
- Rich Hill Fire Department
Published by Bates County News Wire on October 24, 2022