In the field technology helps take wanted subject off the streets

On the morning of 11/8/2022, Bates County Deputies received a call in reference to the Prairie City area in reference to a suspicious subject in the area. The male subject was going door to door asking for an unknown female subject.
Deputies responded to the area and while in route dispatch advised that the male subject was confronted by the armed homeowner and ordered to exit his vehicle and sit on the ground until deputies were able to get to the scene.
Once on scene the deputies attempted to identify the subject but was unable to positively identify him from the information given by the subject. Lucky for this gentleman, the Sheriff's Office had recently purchased a Morpho Finger Print Scanner that is hand held and can run his fingerprints through our in-car computers.
Since the male subject couldn't remember who he was, the deputies were able to help him and advised him that the name he gave them was false and that his real name was Paul Michael Thebo. Luck has it, the real slim shady Mr. Thebo had active warrants out of Bates County.
Mr. Thebo was arrest on his warrants for 3 counts of Violation of an adult protection order and two counts of Domestic Assault in the 2nd degree. He was transported to the Bates County Sheriff's Office where he was booked in for his 4 warrants with a bond of $4000.00.
Mr. Thebo will also be facing additional charges for obstructing an officer.
A total of three Finger Print scanners were originally purchased by the Sheriff's Office to help identify subjects that we can't get through our traditional methods. So far the device has been deployed multiple times identifying people who have active criminal warrants. The device has been deployed two times to identify deceased subjects during death investigations.
Technology has been a huge help in identifying criminals and helping us take them of the streets. Quickly identifying a wanted person is crucial to making sure we aren't releasing them back into our community.
So far the Sheriff's Office has three units in service and has ordered an additional three units. The devices utilize the in-car computers to communicate and transmit finger prints to the AFIS system.

Disclaimer: Arrest records are public information. Any indication of an arrest does not mean the individual identified has been convicted of a crime. All persons arrested are innocent until proven guilty in a court of law. 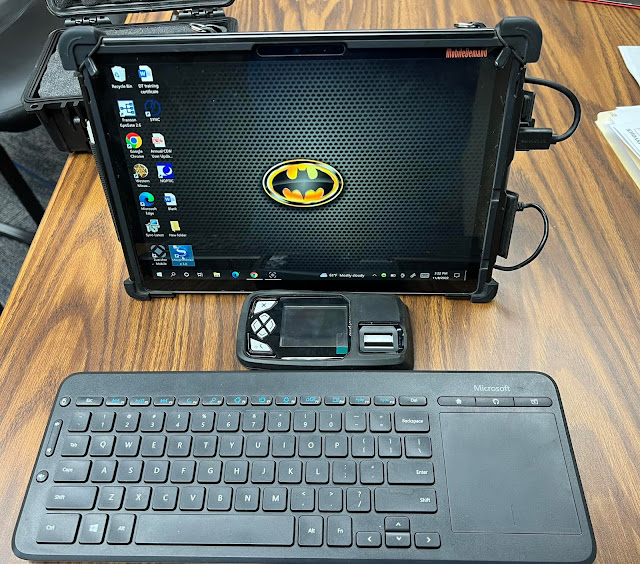