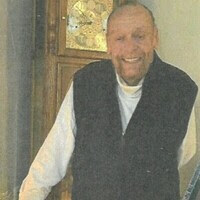 John Datsman Miller, age 78, of Raymore, Missouri, passed away on Wednesday, November 9, 2022 with his loving wife at his side.
John was born in Cherokee, Iowa on November 16, 1943, to Harold and Edna (Skip) Miller and was raised on a farm in Inwood, Iowa. In 1951 at the age of 8, he contracted polio. John graduated from West Lyon High School, was active in Future Farmers of America (FFA), 4-H, Lyon County Council officer, and played clarinet in the high school band.
He attended the University of Alaska in Fairbanks. He spent a year working on a gold dredge off the coast of Nome in the Bering Sea. John lived in Nome working for the Alaska DOT until his retirement in 1998. John would get his hours in during the summer months and spend the winters traveling the world.
He journeyed from North Africa through the Sahara Desert to South Africa where he spent months visiting with his friend Lew Trask. In later years he spent time on a farm in Western Australia with his friend Bruce Smith.
He traveled South America floating down the Amazon on a barge, sleeping in a hammock. He was known as a “traveler”, not a tourist. In October 2002 John married Barbara “Babs” Faber and they lived in Iowa Falls, Iowa until moving to Foxwood Springs in Raymore, Missouri.
John is survived by his wife Babs, the love of his life; daughters Victoria (Matthew) Blume and Cheryl (Packy) Clifton, Pocatello, Idaho; three grandchildren, Charles, Emmet, and Georgia; sisters Mary (Donald) Hoy, Overland Park, Kansas, Jean (Al) Vezey, North Pole, Alaska; and brother James Miller, Lake Chapala, Mexico; as well as four nieces and three nephews.