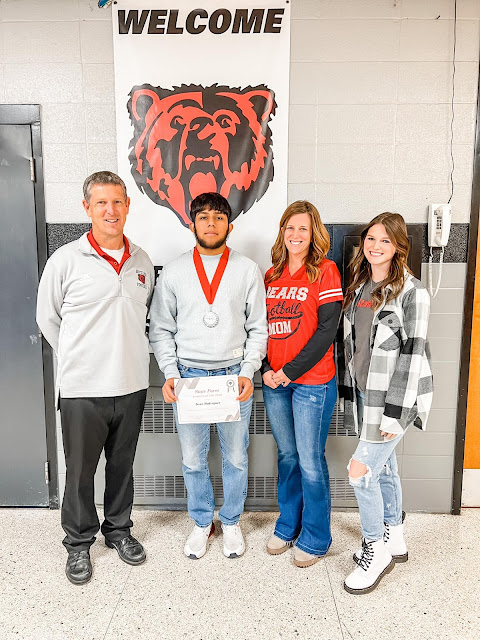 We are excited to announce this week’s State Farm Student Athlete of the week, junior Issac Rodriguez from Butler. Issac plays middle linebacker and center for the Butler Bears. Issac was nominated by his head coach Gregg Webb after their win against Windsor last week advancing them to the District Championship. We asked Issac what have you learned from playing sports?
He stated, “he has learned not to take everything to heart. Also, learn how to pick others up when they need it.” We asked him to state what it takes to be an elite athlete. He replied with, "it is how you decide to be a leader. You share a deep message with your words and give constructive criticism.
An elite athlete doesn't have to be the best player, but the player that steps up to the role of being the leader. Everybody on a team is important, but it is that person that the team respects and looks up to." Finally, we asked Issac if he had anything to say before the big game tonight. He said, "everybody needs to stay positive and go play as a team.
Both sides need to play clean and have good sportsmanship as it's a tough rival game." We wish the Butler Bears and the Adrian Blackhawks the best of luck tonight as they go into this awesome rivalry game fighting for the district title!
Pictured left to right: Head Coach Gregg Webb; Issac Rodriguez, son of Jesse and Valerie Rodriguez; Kellie Davidson, State Farm; Baylie Pitts, State Farm.
Published by Bates County News Wire on November 11, 2022