Thank you from BL & Sons Disposal of Rich Hil 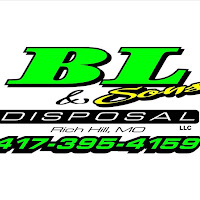 Brad and I would like to thank everyone for all the calls texts and help yesterday. Special shout out to Josh and Melissa Entrikin (first responders) and the Ambulance Crew for their quick response as well as the rest of our crew for jumping in and making certain that the job was done.
Trayton our son and crew member was injured yesterday while on the route, He lost his grip on the truck and fell, landed on the street, and sustained a head injury leaving him with 13 staples in his head. We are so thankful that he is ok and will recover after some rest.
- Courtesy of BL & Sons Disposal of Rich Hill
Published by Bates County News Wire on November 10, 2022