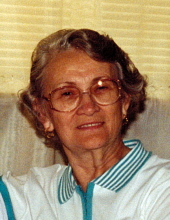 Marjorie Lucille McGinnis, age 97, a resident of Ft. Scott, Kansas, passed away Thursday, January 12, 2023, at the Guest Home Estates in Ft. Scott. She was born August 24, 1925, in LaCygne, Kansas, the daughter of Henry Isiah Bergmann and Stella Lee Boyd Bergmann.
She grew up and attended school in LaCygne. Marjorie first married Henry Robert McDaniel in 1942. To this union, five children were born, Robert, Louise, Harvey, Connie and Michael. Henry passed away in 1957.

She then married William R. Peacock in 1960. Marjorie and Bill had one daughter Michelle. Bill passed away in 1990. Marjorie later married Roy “Mac” McGinnis in 1997. He passed away in 2015. Throughout her life, Marjorie lived in many places, primarily in Oklahoma and Kansas.

She had worked a a variety store for several years in Owasso, Oklahoma and also worked for twelve years for Wal-Mart in both Miami, Oklahoma and Ft. Scott, Kansas. Marjorie enjoyed reading and crocheting. She was a past member of the V.F.W. Auxiliary.

Survivors include her children, Robert McDaniel of Miami, Oklahoma, Harvey McDaniel of Eudora, Kansas, Connie Fergerson of Hattiesburg, Mississippi, Michael McDaniel of Ft. Worth, Texas and Michelle Stine of Redfield, Kansas; eleven grandchildren and numerous great and great-great-grandchildren. Also surviving is a sister, Ruth Allison of Marshall, Missouri. In addition to her husbands, she was preceded in death by a daughter, Louise Schuler, three grandchildren, four sisters and nine brothers.

Graveside services will be held at 11:30 A.M. Monday, January 16th at the Oak Lawn Cemetery in LaCygne, Kansas. The family will receive friends on Monday from 9:30 A.M to 10:30 A.M. at the Cheney Witt Chapel prior to leaving for the cemetery. Arrangements are under the direction of the Cheney Witt Chapel, 201 S. Main, Ft. Scott, Kansas. Words of remembrance may be submitted to the online guestbook at cheneywitt.com.
Published by Bates County News Wire on January 13, 2023